Welcome to the website that celebrates the life and times of 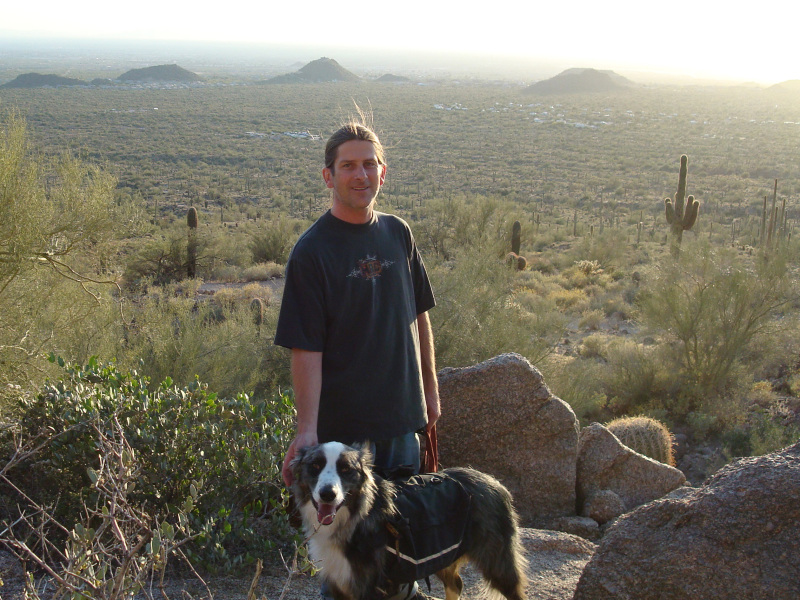 Dino came into my life in the summer of 2008. A friend of mine saw his picture on the website for the Power Road Animal Hospital in Mesa, AZ, and sent it to me with the caption "looks interesting", indeed he was a striking young fellow. So my lady and I arrived at the hospital's kennel and were greeted to a couple rows of non-stop barking, as we walked down the row, we came upon Dino, who was sitting in his cage not barking at all, looking like a complete gentleman, much like the pose he has in some of the pictures I've featured on this website. We took him out to the dogrun and we played for a little while, then came back a few days later and took him home.

Not to say there were no challenges, there were issues with his digestion when I first got him, but after some help from our friendly neighborhood pet store, Sunflower Pet Supply in Tempe, AZ, he was soon in peak shape. He had more energy than anything I'd encountered up to that point, I immediately adjusted my schedule to wake up at 5 a.m. so we could go on a 45+ minute bike ride through our neighborhood near Meyer Park in Tempe, before I had to go to work. During the day my lady would walk him sometimes multiple times, and then when I returned from work we'd all go on a pack walk. We also taught him valuable things, like having a place to go when I tell him to "go lay down" because he's just standing there panting.

Over the years, Dino has had a very full life, not only with all the walks and bike rides, but he would go camping many times a year, either up on the Mogollon Rim, out in the White Mountains, at the magical hot springs in Eden AZ, and all throughout the American Southwest. Every chance I'd get I'd let him out of the car to run alongside while we headed down untravelled dirt roads, he could run 30 m.p.h., easy. His love for skunks is legendary, I think he finally learned his lesson one miserable day in Eden when he got it straight up his nose.

Currently he and I, and his little brother, Harley, are dwelling in the beautiful Pacific Northwest, he loves the weather, and all the animals to watch, and will lay for hours by the front stoop watching life go by our home in the hills.